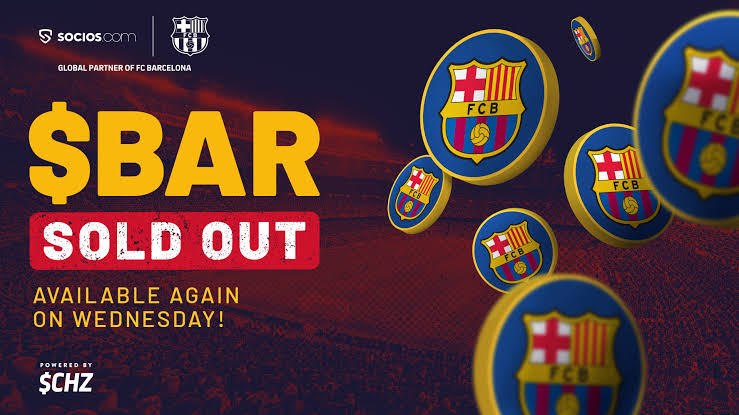 The $1.3 million token sale was slated to hold for 48 hours, but interestingly concluded in less than two hours. A special highlight of the event was a peak sale of $777,000 tokens in less than 2 minutes.

Dreyfus noted that the token saw a five-fold increase in demand during the sale as they received orders from over 4,000 fans across 106 countries. He added that Turkey, Poland, Japan, France, Spain, UK, and Italy rank among its top buyers.

The CEO acknowledged his surprise at the numbers and flash sale, attributing Barcelona’s wide fan base as a factor. “I guess that’s why Barca is big and also why we are pushing hard with cryptosphere.” he said.

The $BAR Fan Token is designed to promote interaction between the club and its supporters. As announced by FC Barcelona, a first use of the token will allow holders to participate in the club’s surveys and polls on team decisions such as choosing the design for a new mural to decorate the first team locker room.

Live trading for the $BAR is scheduled to launch on Wednesday (24/06/2020) on the Socios and Chiliz platform. The $BAR token will be available for trading and purchase against the Chiliz native cryptocurrency (CHZ), and has been featured on coin tracking websites in anticipation of its official trading launch.

The FC Barcelona token is one of over six soccer cryptocurrency tokens launched by clubs in partnership with Chiliz. Other partner teams include Juventus ($JUV), Paris St Germain ($PSG), and more as the firm moves to expand its world’s first sports trading exchange.