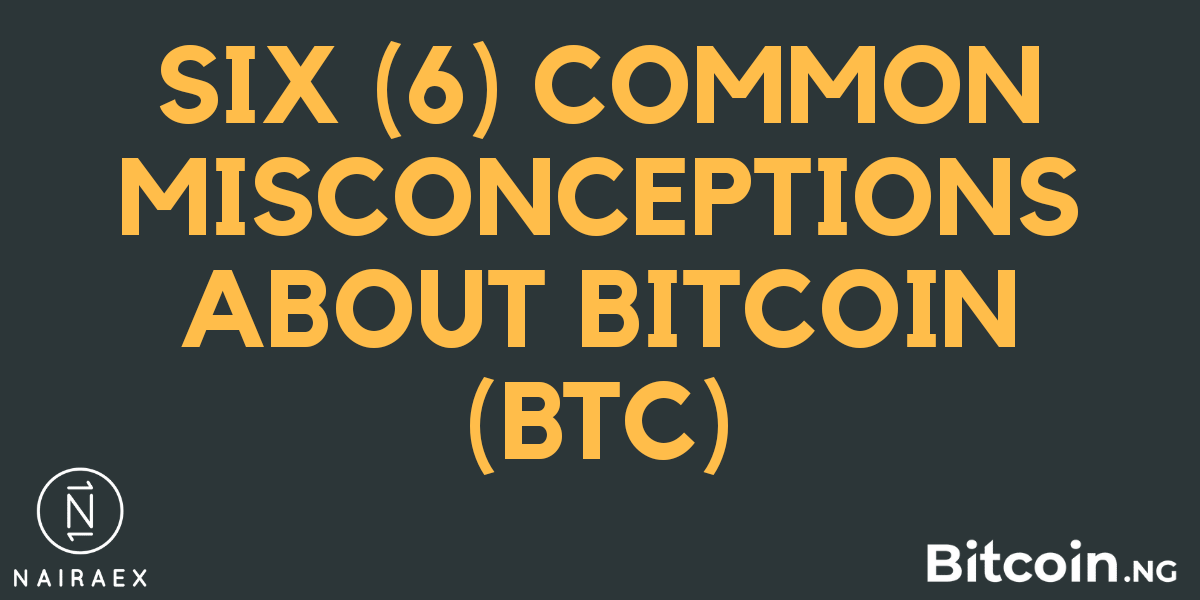 There are many misconceptions about Bitcoin (BTC), from a lack of education to a negative perspective, or fear of losses and cost.

This publication seeks to clear the air around these notions under six (6) most common headings:

1. Bitcoin is too Expensive

3. Bitcoin is Risky and Speculative

4. Bitcoin is Used by Criminals

5. Bitcoin Has No Real Value

6. Bitcoin Can Be Hacked

1. Bitcoin Is Too Expensive

This is one of the common myths about Bitcoin. Well I’m here to tell you its not true.

So, do away with the expensive thought. Get started. Buy as much as you can afford to hold. For long term holders, you can buy small and accumulate till you own 1 full bitcoin.

You can buy as low as $10 worth of Bitcoin on Nigeria’s Trusted Bitcoin exchange. – NairaEx, its fast, safe and reliable.

2. Bitcoin Is Too Complicated

Yeah. This point hmm…let’s say everything involving money involves calculations, and yeah not many people like mathematics, so whether its fiat or Bitcoin there’s always a technical twist.

However, I’ve got good news. If you can use a smartphone, can use the internet or can drive a car, then you’re good to go.

Interestingly, Bitcoin gets easier to use by the day, with the technology only about 10 years old, new applications and solutions now make it very easy for the newbie.

As an added advantage, there are good materials to read, how-to-guides and steps all over the internet. All you have to do is follow trusted websites such as Bitcoin.NG or the NairaEx blog, which provides you with enough resources to buy, sell and use Bitcoin (BTC) easily.

3. Bitcoin Is Risky and Speculative Asset

This narrative only becomes reality for those with the Get Rich Quick mindset.

A friendly advice, just as with all investments, there are risks to every asset, whether stocks, commodities, real estate and more. But one way to stay ahead of these risks is to get the right education and information before ever investing into any asset or Bitcoin.

One popular Bitcoin quote says: “Do not invest/buy what you can’t afford to lose.” This gives you an edge with any investment instrument.

About speculation? All investors look forward to gains on their assets same way BTC holders do. However, the measure of returns on any investment are not fixed, so its all speculative to a certain degree.

However, one cool fact about bitcoin is despite its volatility, history shows that for every price dip, bitcoin has recovered double.

Also, Bitcoin’s volatility can be managed through the use of stablecoins or stop loss if you’re day trading.

4. Bitcoin Is Used By Criminals

LOL before, during and currently with the advent of Bitcoin, crimes have been perpetrated using fiat/paper money/US dollar, and all other forms of currency etc.

Critics say bitcoin is a way to secretly fund illegal activity like Silk Road; but its actually the opposite.

Even though there are no names on wallet addresses, present day technology and KYC measures have made criminal activity traceable.

So its Use Bitcoin for Good, or Get Rekt for bad.

5. Bitcoin Has No Real Value

This fifth major misconception about bitcoin says it has no intrinsic value compared to traditional currencies. Some say BTC is just a bubble, just thin air, and not backed by any commodity like gold.

The above statement is baseless, because as at this time no currency nowadays is backed by any real assets. The last time the US dollar was backed by gold was in 1971; from there onward governments globally have only resorted to printing new notes, and quantitative easing which has led to devaluation of fiat currency and inflation.

These other currencies such as the US Dollar have value are based on what people trust the piece of paper to be worth.

The question is what do you trust? Bitcoin – an independent, non inflationary currency, with a fixed supply of 21 million coins which cannot be repeatedly printed or a government currency that is several trillions in debt and continuously reprinted.

6. Bitcoin Can Be Hacked

This is as erroneous as it sounds. While bitcoin exchanges or wallets can be hacked due to poor security by the user or poor password protection similar to those of regular banks accounts, Bitcoin’s network remains the most secure, hack proof, immutable ledger system courtesy of the blockchain.

Therefore, it is important to ensure proper Bitcoin wallet security measures, such as 2-Factor authentication, strong passwords, holding your wallet 12-phrases, and sticking to trusted platforms like NairaEx.

For clarity, to hack the bitcoin network , you’d need all the computer power on the planet with over a thousand years to roll back every transaction till the first genesis block. You’d also need to coordinate a massive simultaneous attack on its 10,000 nodes distributed across the globe at the same time due the decentralized nature of the bitcoin network.

Hence, the longer the bitcoin blockchain gets, the harder its is to hack it; since every block needs to be changed and a new block is created every 10 minutes.

Hope this article helped you debunk these bitcoin myths.

Do you have any other misconceptions about Bitcoin or cryptocurrency? Share in the comments.