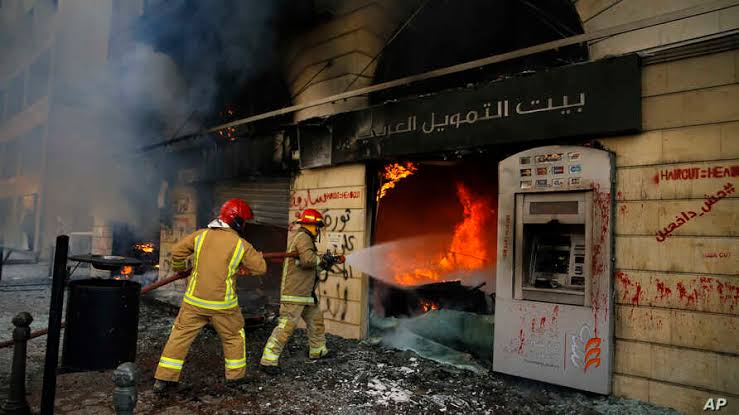 Over the past six months, banks in Lebanon have imposed strict capital controls on their customers amid the nation’s currency collapse. The banks had limited withdrawals of the Lebanese pound, as well as banned any withdrawals in foreign currency.

However, despite these steps, efforts to keep the country from an unprecedented financial crisis have failed, and turned violent this week as protesters took to the streets, targeting and setting banks ablaze.

A Failing Fiat Currency and Economy

The Lebanese pound saw a rapid plunge against the US dollar, haven lost 50% of its worth since October 2019, causing a loss in savings value, salaries and wages for millions of its citizens.

This economic fail now combined with the coronavirus lock-down seems to breed anger among the people who now take to the streets to demand aid from the government, and better financial conditions.

The country is also said to have defaulted on its foreign currency debt, and did not repay a $1.32 billion Euro bond, which further worsens its liquidity crisis.

Plans by Lebanese politicians to approve a relief package for food and basic needs to citizens also hit a wall, as the government was unable to reach an agreement.

One of the protesters Abdelaziz Sarkousi, 47, explained:

“What you’re seeing is a result of accumulated problems. We had a revolution, people were suffering, then came corona and people were locked in their homes for a month and a half without the state securing food and drink or anything for them. Now we have reached a state where unfortunately you cannot control people anymore. People are hungry and food prices are skyrocketing.”

Does Bitcoin Solve This?

At this time, the currency and economic situation of both developed and under developed nations have been hit following the COVID-19 outbreak.

Governments have resorted to extreme measures to revive their economies; including printing of new notes which comes with its hyperinflation effect.

A first benefit of Bitcoin during this time is health; as BTC can be transferred securely and payments made instantly without physical contact, hence safe for all.

There is also the benefit of Bitcoin’s fixed supply (21 million Bitcoins ever) which makes it a non inflationary asset.

Bitcoin further serves as an investment instrument, one of which equates directly to the value of the US dollar. Making it an asset or currency of choice in most crisis situations.

It will be recalled that with the economic downturn in nations such as Zimbabwe and Lebanon, both have seen a spike in bitcoin interest by citizens.

Will Bitcoin and Digital Currencies power a new economic shift? Share your thoughts in the comments.