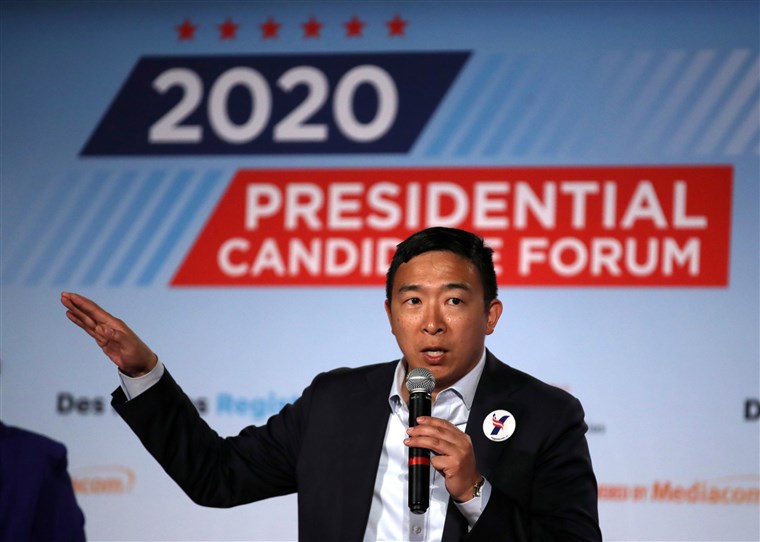 Andrew Yang, a candidate of the Democratic Party for the 2020 United States Presidential elections, says he will implement blockchain-based mobile voting as president.

According to his official campaign website, Yang states that the United States should take up voting in mobile devices, and utilize blockchain tech for verification processes.

It’s ridiculous that in 2020 we are still standing in line for hours to vote in antiquated voting booths. It is 100% technically possible to have a fraud-proof voting on our mobile phones today using the blockchain. This would revolutionize true democracy and increase participation to include all Americans – those without smartphones could use the legacy system and lines would be very short.

Mr Yang further discusses the possibility that mobile voting through blockchain technology will increase public participation in elections as opposed to the current 50% participation at this time.

As President, I will work to modernize our voting infrastructure to utilize modern technology to make it easier and more secure to vote, thus increasing the number of Americans participating in our democracy.

The use of blockchain in voting offers numerous benefits. Blockchain-based voting systems offer a decentralized, tamper-proof platform; one without a single point of control hence preventing cases of result or data modification.

Blockchain-based voting models breed trust as election data are verifiable and traceable by all; also the use of this technology inspires enthusiasm and increased voter’s participation.

There are also cost benefits; as large scroll of papers similar to those used in Nigeria’s elections are being eliminated, time and resources are saved, and cases of post election tribunals will become minimal.

While many agree that the current paper ballot system requires an overhaul, a major concern remains the feasibility of implementation of blockchain voting systems; especially in developing nations like Nigeria.

Andrew Yang’s comments come as no surprise. The Democratic candidate is known as a Bitcoin proponent haven unveiled his policies to ensure clear crypto and blockchain regulations, in a bid to promote innovation and adoption should he become president.

In his crypto policy document, Yang highlights the potential gains and need for cryptocurrency adoption. He is also known to have accepted campaign donations in Bitcoin.

Looking further, the list of US Presidential hopefuls consists of some indifferent candidates to the crypto topic, current US President Donald Trump had said he is “not a fan of Bitcoin and other cryptocurrencies”, as he maintains the supremacy of the US dollar; in contrast to Yang’s ideals.

While Yang has become the crypto community’s darling and friend of youths following his plan that every adult American receives a $1,000 monthly; Trump seems to have maintained an ‘old-school’ stance, and despite his comments many see his opinions as free publicity on the potential of crypto assets.

At this time, the race for the number one citizen spot is up for grabs; it is yet to be seen if the cryptocurrency and blockchain topic will be raised in favour of any of the contesting parties.