Facebook Libra Coin Hearing: Mark Zuckerberg vs US Congress, All You Need to Know 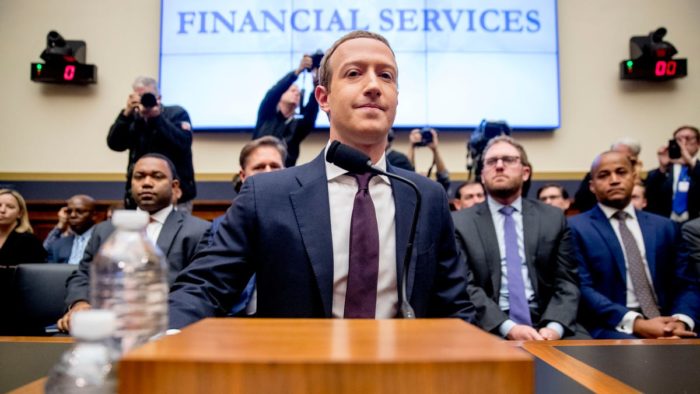 October 23 – Facebook CEO Mark Zuckerberg officially testified before the US House Financial Services Committee in a hearing focused on Facebook’s proposed Libra cryptocurrency; which was announced in June this year.

Ahead of the hearing, a look at the CEO’s prepared remarks established Zuckerberg’s resolve not to launch the coin in any country without prior US approval. He said:

“Facebook will not be part of launching the Libra payments system anywhere in the world until US regulators approve.”

While his initial remarks reassure this, he however did not state that the Libra will not launch; given the coin was proposed for 2020 as the social media giant foresaw these delays.

Speaking further, as if throwing a bait, Zuckerberg referenced China’s plans to release a similar project in the coming months, highlighting that should the Asian power do so it would greatly subdue America’s top spot in the financial and technological world.

On the subject of Data privacy, Zuckerberg maintained that Facebook does not sell or share people’s personal information with third parties or advertisers directly. This he said while assuring that Calibra wallet users will not have their account information shared, except to prevent fraud or criminal activity.

He also reassured that the Libra coin is not an attempt to replace sovereign currency, but to serve as an online payment system only.

Six (6) Hours of the Hearing Proper

Chairwoman of the US Financial Services Committee Maxine Waters began by suggesting that the best course of action for Facebook was to focus on correcting current deficiencies in its operations before proceeding with the Libra. The Chairwoman focused on concerns bothering around consumer trust.

On the day, the Facebook CEO began by describing the current financial industry as stagnant. In his words “The financial industry is stagnant. There is no digital financial architecture to support the innovation that we need”. He continued; “I do not know if the Libra is going to work, but I believe in trying new things.”

Continuing proceedings the committee chairwoman referenced the previous ban on cryptocurrency ads by Facebook. She accused the company of making a new U-turn after it realized how much it could dominate the market.

Rep member McHenry began his questioning by asking about China, particularly concerns of its growing number of tech companies. Zuckerberg responded: “Today, 6 out of 10 of the top tech companies are coming out of China and certainly do not share our values.” (This he said suggesting that the Libra coin was America’s best chance against China’s cryptocurrency projects.

On the possible refusal of US regulators to approve the Libra, Rep. Huizenga asked to know what would happen if regulators opposed the Libra launch while the Libra Association decides to carry on. Zuck responded “Then I believe that we would be forced to leave the association.”

Another committee member queried: “Wouldn’t it be easier if there was simply a digital dollar? To this Zuck responded that using a digital dollar would be good for coping with US regulation but would interfere with global usage.

Next up, Rep Dean accused Facebook of trying to form a “shadow sovereign government” considering its enormous data power and now attempted financial involvement. His remarks were further supported by Rep. Jesus Garcia who asked “how much power is too much for you? Facebook has acquired too much power, it is too big and we should consider breaking it up.” As he referenced the bill to Keep Big Tech Companies Out of Finance.

A more supportive representative Philips said “I am one who celebrates innovation and innovators and, frankly, wish we had more of those in congress.”

The over 6-hours hearing ended with both Chairwoman and Vice Chairman of the committee thanking Zuckerberg for his time. They also asked him to consider the committee’s reservations about Facebook’s diversity, handling of customer data and potential cases of becoming a monopoly organization.

In all, the hearing failed to concretely answer pertinent questions or clearly show if the Libra will be approved or not. It however proved more of a tactical win for Facebook with the CEO using the opportunity to buttress his points while shunning some controversial questions.

The following ponts are noteworthy: First, US regulators still doubt or do not trust Facebook due to its past controversies. Some critics of the Libra project believe the company should break up its stretch of companies ( Instagram and WhatsApp included) as it already wields too much power.

While Zuck emphasizes the need to dominate the digital currency space over China, some regulators view the Libra as another direct threat to the US dollar.

Zuckerberg’s arguments are in line with those of the Coinbase CEO who stated that the US may be stifling innovation through this regulatory approach; an argument further supported by Rep member McHenry who called for a balanced approach to the Libra discussion.

Another theme played by the Facebook CEO was his strong attempt at separating Facebook from the Libra, making them two entities as he portrayed their commitment not to mix social media business with the financial company.

In summary, while AML and illicit financing are legitimate concerns, arguments around these are overblown by critics of the Libra project.

For all concerned, the Facbook coin will surely ensure KYC procedures as well as transparency; especially from a firm that knows where you live, what you eat, your friends and neighbours and maybe now how much money you’ve got.

The hearing also highlights that the primary focus is the Facebook trust problem, one which would take some good convincing for the Libra to launch.

What are your thoughts on these? Share in the comments.