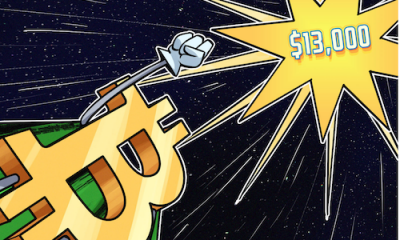 BTC had initially showed signs of some bearish movement after it closed below $11,450, but at this time, sentiment is trending on the upside following its reclaiming $1000 in 24 hours. This latest movement however spelt bad news for bitcoin shorters (those who traded on BTC price going down).

Using July’s monthly close as a yardstick, analysts say there is significant bullishness should BTC close above its previous ATH this year at $13,863.

Major focus still remains on the number one cryptocurrency which now holds 65.1% of the total cryptocurrency market cap; a dominant percentage last seen in April 2017.

Altcoins on their part have continued their very slow price movement against BTC. Analysts say with attention moving to Bitcoin and BTC dominance at a record high, most alts will continue in red over the period.

A look at the hourly chart shows a potential break above $13,900, with a big resistance around $12,900. However, BTC may need to come down around the $11,250 point of control in order to sustain such huge movement.

On the daily chart, the upside bullish momentum is visible, with next profit target around $16,300; this will however be determined by the $12,900 resistance point. Once this key resistance point at $12,900 is broken, there will be very little resistance between that point and levels close to Bitcoin’s overall ATH of $20,000.

Bitcoin’s 14-day relative strength index (RSI) is currently in its overbought zone, however analysts say this should not be a cause for concern under current bullish conditions.

What are your thoughts on this? Will the $12,900 resistance hold?