What is Bitcoin SV? | The Definitive Nigerian Bitcoin SV Wiki 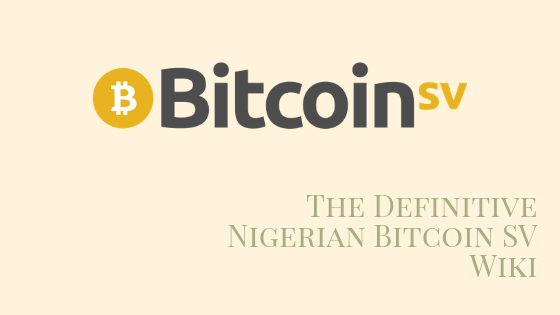 In April and May 2019, a new version of Bitcoin started garnering worldwide attention. Rising by over 200% since the start of the year, Bitcoin SV (BSV) is a new implementation of the original Bitcoin blockchain. BSV is also one of the cryptocurrency markets most controversial new altcoins. The only question is, what is Bitcoin SV and should Nigerians invest?

What is Bitcoin SV?

Bitcoin started in 2009 with the mining of the Bitcoin genesis block by Satoshi Nakamoto. At this time, Satoshi Nakamoto made Bitcoin’s core software opensource. This means that anyone anywhere can freely download, copy, edit, and reuse the software which Bitcoin uses to operate.

Up until 2011, Satoshi Nakamoto was in semi-regular communication with grassroots developers maintaining the Bitcoin blockchain. However, in late 2011, Nakamoto ceased all communication with anyone involved with Bitcoin. Neither did he continue to develop Bitcoin himself.

2014 and the Founding of Blockstream

With Satoshi Nakamoto no longer contributing to the development of Bitcoin, remaining developers had to start working without his guidance. In 2014, leading developers of Bitcoin, therefore, founded a company called Blockstream.

Blockstream was intended to streamline the development of Bitcoin and tackle Bitcoin scaling problems. Moreover, the most pressing scaling problem then (and now), concerned the fact that Satoshi Nakamoto had placed a limit on the number of transactions the Bitcoin blockchain could process.

As Bitcoin grew in popularity, Bitcoin fees and transaction processing times began to increase. To tackle this problem, Blockstream decided to implement an upgrade to the Bitcoin blockchain called Segregated Witness (Segwit).

At the time, almost all Bitcoin developers working to maintain the blockchain agreed that Segwit should be implemented. However, in 2017, a group of independent developers decided to create a clone of the Bitcoin blockchain and implement a different scaling solution.  This clone of Bitcoin became Bitcoin Cash.

Craig Wright was famous at the time, as an individual claiming to be Bitcoin’s creator Satoshi Nakamoto. However, many refute this claim. This is due to Wright (to date) not having provided any evidence that he is indeed Nakamoto.

Later in 2018, Craig Wright began to disagree with how Bitcoin Cash was being developed. Wright, with the backing of Sports betting tycoon Calvin Ayre and private research firm n-Chain, therefore, released a new version of Bitcoin called Bitcoin Satoshi’s Vision.

Bitcoin Satoshi’s Vision (Bitcoin SV) is essentially an unadulterated version of the original Bitcoin blockchain. There is no Segwit. More importantly, there is no need for anything like Segwit. This is because  Bitcoin SV allows unlimited transaction block sizes. In theory (and in practice according to n-chain) this makes Bitcoin SV infinitely scalable.

At face value, Bitcoin SV looks like a promising investment. However several controversies surround BSV, which Nigerian investors need to take into consideration.

Bitcoin SV is also presently engaged in a campaign to discredit the original Bitcoin (BTC) and all other altcoins. To do this, Craig Wright and n-Chain have retrospectively filed patent applications on several blockchain technologies which already exist. In the process, they have begun to insinuate that long-established altcoins like Litecoin and Ethereum are breaking the law by using stolen n-Chain code.

Bitcoin SV jumped up in value by over 200% in April and May. For this reason, many Nigerians are eager to invest. However, it is important to remember that Bitcoin SV is a largely privatized and largely centralized cryptocurrency.

Some argue that the governance of Bitcoin SV and attempts to control the Bitcoin narrative are a purposeful attempt to privatize the cryptocurrency market.

It also needs to be remembered that just two years ago in 2017, Bitcoin Cash attempted to claim that it was the real Bitcoin. That attempt failed. In this case, everyday Nigerians should think carefully before investing in BSV, and never invest more than they can afford to lose.