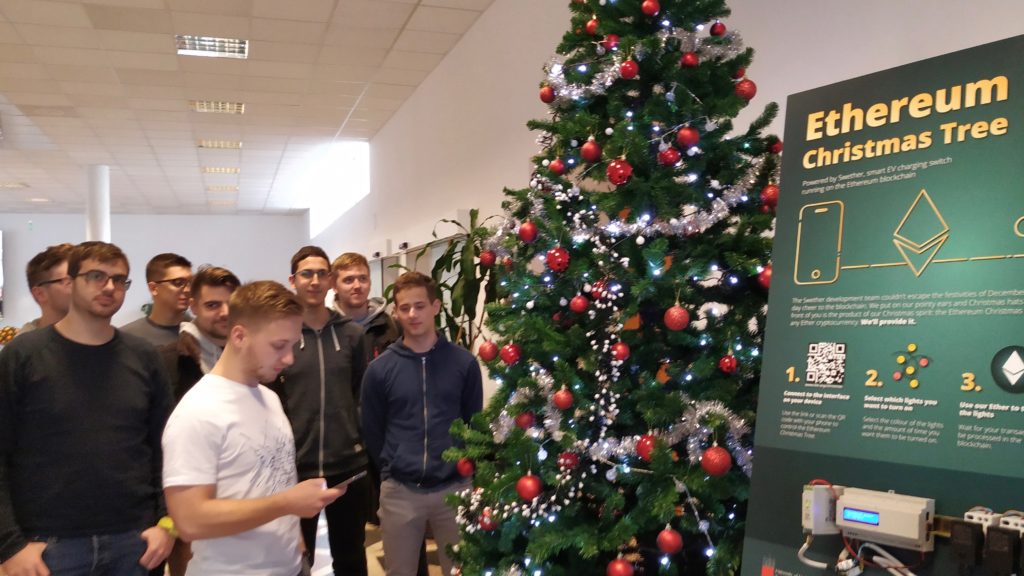 The University of Ljubljana, the oldest and largest university in Slovenia has created a blockchain-powered Christmas tree which allows anyone to control the colour of its lights by ending Ethereum (ETH) coin donations.

The project developed by students of the Faculty of Electrical Engineering has again demonstrated the numerous use cases of blockchain and distributed ledger technology.

Developers say the project features a fusion of blockchain technology and internet of things (IOT) into a Christmas light, making it an interactive piece which allows people change its colours by sending payments to it.

Anyone with the link to access the site can control the Christmas tree.

The tree utilizes the Swether IoT device which scans the network for payments and once it finds any, it changes the colour of the lights accordingly.

“We created a simple web user interface that can be opened on your mobile phone or another device, then you can select the colour of the lights and duration of time it should go on for. In the background, it executes an Ethereum transaction which is accepted by a smart contract.”

Matez adds that the project is simply a demonstration of how blockchain technology and IoT can be used to manipulate real-life obejects, as he expressed interest in developing more complex decentralized applications in the future.

The Christmas tree project forms a part of growing applications of blockchain technology.

Launched at a perfect time during this year’s yuletide season, it brings the interactive benefits of blockchain technology first-hand to the user; aiding better understanding and adoption of the technology.

The Slovenian university project is similar to the Nano (Nano coin) powered Xmas light launched by the cryptocurrency’s development team.

Nano’s Xmas tree also changes colours when payments are sent to it, with the team revealing that all donations will go to the Street Charity organization as part of the seasons goodwill.

“We created this to show that you could have a fun and engaging way to drive donations for charity by having something cool and innovative tied to a simple donation,” declared one of the developers.”

The Nano coin currently ranks 49th by coin market capitalization, with a price of $0.65 per coin.