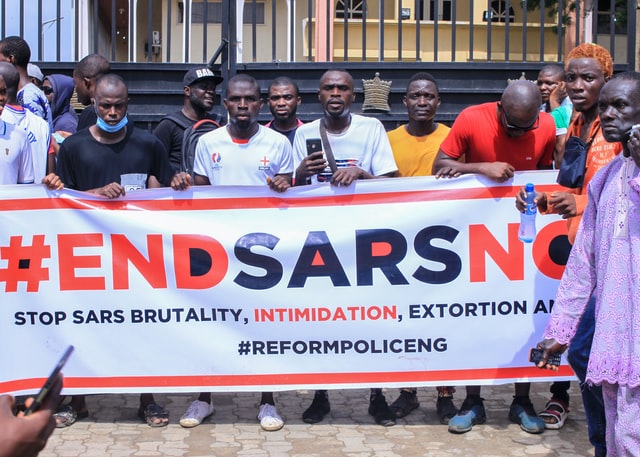 Crowds have been protesting around the streets of Nigeria, hoping for police reforms in the nation. Many of the protesters are youth. For days, they have cried out for police reforms. Some protestors have resolved to use Bitcoin in the process due to their bank accounts being blocked. As more Nigerians look to Bitcoin, the risks of them remaining financially included, irrespective of political views may be reduced substantially.

Nigerians Protest for an End to Police Brutality

In what will go down in history as one of the biggest protests to ever take place, Nigerians have taken to the streets and to social media platforms to demand police reforms. Many demands have been made, including the 5 point demand which the presidential panel on the police recently gave its approval of. The 5 point demand includes provisions for:

• Justice for victims of police brutality

The progress made by protestors did not come without its costs. Many reports have surfaced of some protestors being arrested while others lost access to their bank accounts and links to other payment platforms.

As a result, more Nigerians are now looking to Bitcoin as a need rather than a want. The cryptocurrency was trending on Twitter, due in part to the increased demand for it, given the circumstances.

Some protestors have gone as far as encouraging more protestors to choose Bitcoin over the Naira to express their frustration with the current system and the closure of their bank accounts.

Other protestors have called for the use of other digital currencies such as XRP and ETH. While these digital currencies could play a significant role in ensuring the banked and unbanked stay connected to the financial system, it remains to be seen whether or not their transactions will be tracked and how their use of the digital tokens will be legally classified as under new laws.

Photo by Tobi Oshinnaike on Unsplash