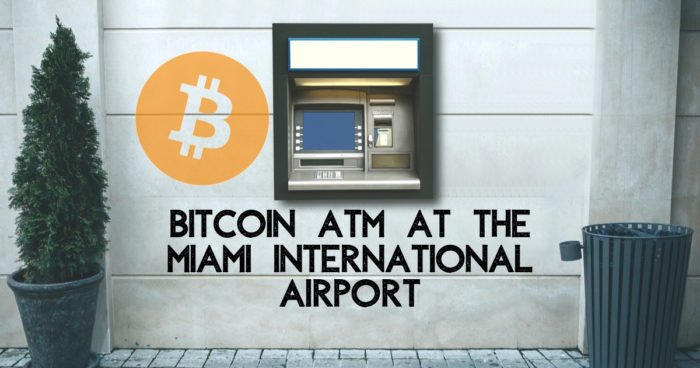 The Miami International Airport has received its first Bitcoin ATM this week.

The Bitcoin ATM is courtesy of Bitcoin ATM firm – Bitstop, and is installed on concourse G next to gate 16 of the airport. The BTC Atm will allow customers to buy Bitcoin (BTC) for cash.

Speaking on the development, Bitstop co-founder Doug Carrillo described Bitcoin as useful to travellers for security and convenience. He said:

“More and more people prefer to travel with Bitcoin instead of cash for convenience and security. Miami International Airport is a perfect place for our customers to conveniently exchange their dollars for Bitcoin and vice versa when travelling domestically or abroad.”

Carrillo further states that this is Bitstop’s 130th BTC Atm in the U.S, with the company set to reach 500 Bitcoin ATMs worldwide by the end of 2020.

With respect to declaration of assets, the Bitstop ATM requires users to first register using a valid ID or mobile device. This is done to keep up with regulations regarding amounts of cash or other assets permissible for travellers.

Did you know? There are reportedly over 5,000 Bitcoin ATMs globally. Africa has about 10 Bitcoin ATMs: South Africa (5), Zimbabwe, Uganda, Kenya, and Djibouti all have one each. Most bitcoiners in Africa purchase on exchanges or online platforms.

Nigeria has no Bitcoin ATM at this time.