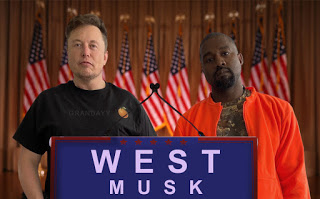 World-renowned rapper and fashion guru, Kanye West used America’s independence day to declare that he would be running for US President in 2020. It remains to be seen whether or not he has filed any official paperwork to appear on ballots.

In a tweet on 4 July, Kanye West states that he is running for president in 2020. Founder of Tesla Motors, Elon Musk responded to the tweet, stating that Kanye has his full support.

If Kanye West failed to submit paperwork in time, he would not be able to get votes in some states in America where it would be too late to register as a presidential candidate. There are only four months left to go before polling day on 3 November. For these reasons, some believe that Kanye may be trying to take votes off of Joe Biden so that US President Donald Trump will win the presidential election.

Kanye West and friends have made positive remarks about Bitcoin in the past, indicating that he is a Bitcoiner. In an interview, he described his thoughts on Bitcoin.

“Now you can take your money and put it in Bitcoin, put it in credit form, put it in cash… and then stand up to the ocean and who’s gonna win?…We definitely are dealing with racism but I want to push future concepts, you know…now I’m doing I’m giving you two streams of consciousness in one. I want to talk about my wife. I also want to talk about Harriet Tubman on the twenty dollar bill… That’s the moment I wanted to use Bitcoin.”

West joins a growing number of celebrities pushing for social change with Bitcoin. Akon introduced AKoin to help build the economy of a smart city based in Senegal, AKoin City. The city runs on renewable energy. It sits on 2,000 acres of land. It will have a real airport and other smart-city features.