Over 44% of Germans Warm up to Cryptocurrency Investment – Report

Blockchain technology is vastly dominating diverse regions of the world and many residents of Deutschland seem to not want to miss out on this innovative trend.

A recent chart publicized by KuCoin displayed the progression of crypto adoption by Germans.

The wealthiest of all European nations seems to have over 44% of its citizens focused on cryptocurrency investment.

While this percentage of residents are inspired to partake of what is expected of the future of cryptocurrency, 37% of them have been noted to be traders on the platform within the past year.

Records also highlight Germany as the first amongst nations to acknowledge bitcoin as a standard of value, thereafter embracing the blockchain system.

KuCoins company’s head, Johnny Lyu, who spoke to CoinTelegraph, made further analysis of this released statistics stating how common it is amongst Germans to rely on their saved funds once they are retired. This has motivated the accumulation and diversification of funds through the blockchain currency space.

However, amidst all the buttering up of increased crypto demands, Germany is yet to establish certain regulatory policies to modulate the utilization of virtual currencies.

Other experts like Florian Dohnert-Breyer, the manager of F5 Crypto have had something to say.

He asserted that as the biggest of all European nations, “Germany is a role model for other EU countries, whose populations are generally more open to long-term investments.”

To him, Germany would progressively push for a crypto-favourable parliament.

Lyu’s words sighted Germany’s official acceptance of crypto investments through consented finance that were specifically assigned to virtual investment, as a solid foundation for crypto subscribers.

For some time now, Bitfarms has strived to increase its hashrate globally

The new mining facility will be called Garlock and will supply over 18MW of power needed for mining operations. Having faced criticism by those living adjacent to the old de la Pointe mining facility due to the sounds of the operation, the relocation of the mining facility is a huge milestone for Bitfarms.

Geoff Morphy, president and COO of Bitfarm who spoke on the construction of the new facility said, “When completed, the total planned capacity of our three Sherbrooke farms, which also include Leger and The Bunker, will fully utilize Hydro-Sherbrooke’s contracted power of 96 MW.”

Bitfarms is currently building a mega Bitcoin farm in Argentina and at completion, the company will be capable of growing its mining power by 210MW. In addition to this, Bitfarmhas invested in equipment to power this mining facility.

In February, the company entered a financing agreement with BlockFi to allow it up to $32 million in funding to acquire more mining equipment.

The NairaEX team is passionate about helping our users achieve their financial goals when they trade with us. Our approach is to partner with users in the journey to personal or business growth – because we are certain that their satisfaction and success also equals our success.

Idowu Johnson is a Lagos based business owner who owns and successfully runs a school where he focuses mostly on students sitting for their WAEC and JAMB exams and making sure to provide them with the right teachings and guidance they require. But that’s not all,

Johnson is also a full-time cryptocurrency trader who buys, saves and sells cryptocurrency for his numerous clients in large volumes. He has been in the crypto business for more than 3 years and he agrees that it has been a very lucrative business venture.

What was his challenge?

When Johnson started his crypto trading business, the biggest challenges he had was:

The trading services he used at the time was difficult to use, slow to complete transactions and charged outrageous transaction fees and instead of gaining new clients, he continuously lost his existing clients due to an inability to complete his transactions in time.

Not only was he losing clients, but he was also finding his cryptocurrency business really difficult to operate and this was a result of constant pressure on him to meet with transaction requests.  He almost gave up. 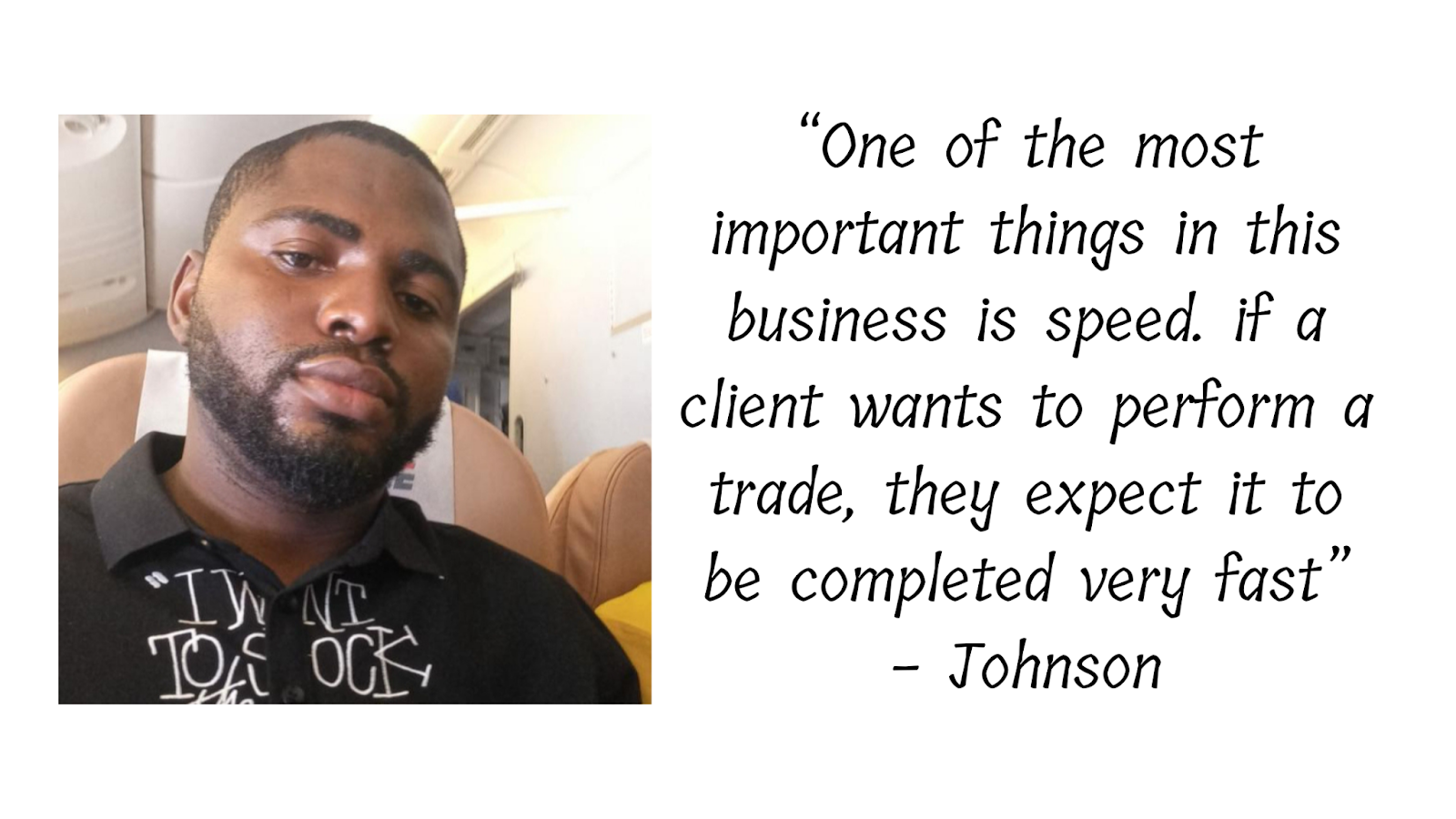 What was the solution?

Johnson casually mentioned his business challenges during one of his conversations with his friend Dami. Dami goes on to encourage him and then told him about NairaEX.

“I have not used NairaEX before because you know I don’t do anything Crypto related but my younger brother does and I have heard him mention how fast NairaEX handles his transactions”, said Dami, and because he still wished to revive his business and although Dami wasn’t so sure, Johnson carried out his research and registered with NairaEX and proceeded to try his first transaction which was:

What is the Result?

After his first few transactions on NairaEX, Johnson reached out to his clients and announced his business restructuring. He informed them that things are better and transaction processes are now faster. The first few clients who traded with him were satisfied and referred their friends who referred other people and gradually with the help of NairaEx, Johnson grew his business from almost failing to a rapid income growth up to 75%

With NairaEx Johnson was able to gain:

Not only has Johnson grown tremendously in his crypto business, but he is also now no longer under so much pressure and has more personal time to grow his other businesses

“I really thank the NairaEX team for the work and effort they put into making sure everything runs smoothly, I am happy with NairaEX and don’t think I’ll stop using the platform anytime soon,” he concluded.

How Nigerians With Bitcoin Escape Poverty

For Nigerians looking to improve their profits, learning to trade with bitcoin has become a valuable skill set.

Nigeria is a big but economy that boasts of having the world’s largest population of black people in the world. Its size and oil wealth has been served as a blessing with many challenges.

“While Nigeria has made some progress in socio-economic terms in recent years, its human capital development remains weak due to under-investment.”

The high unemployment rate in the region is one factor pushing too many individuals to trade. In Nigeria, over the past five years, the unemployment rate has swelled to 27 percent despite the fact it is considered to be the largest economy in Africa.

This pattern also has a dark side. Trading and speculation have affected certain individuals. Like the rest of the world, some have lost money or fallen for a variety of scams as Africans have pursued cryptocurrency as a road to a better income.

Bitcoin and other cryptocurrencies are also young, so people in Nigeria must have a grasp on which blockchain ventures are potentially beneficial rather than dangerous to them, as well as to the rest of the planet.

The data from U.S. blockchain analytics company Chainalysis showed that cryptocurrency payments to and from Africa of under $10,000 – usually made by individuals and small companies – soared more than 55 percent in a year to hit $316 million in June of 2020. This is a strong reminder of the growing relevance of cryptocurrency in the African continent.

Blockchain helps people make their companies more nimble and efficient, and helps those working in places like Europe and North America to hold on to more of the money they take home.

In only a matter of days since launching, the cryptocurrency (WOZK) of Apple co-founder, Steve Wozniak, gains in value by over 1000% hitting a market capitalization of over $1 billion.

Over 1 Billion in Gains for Apple Founder’s Project Token

Wozniak’s cryptocurrency project, Efforce, has caught the attention of many investors who hope for another legendary homerun from the technology entrepreneur. Efforce is designed to leverage the power of blockchain to increase access to energy efficiency projects, investment opportunities, and its token WOZX.

As the world seeks improvements in energy conservation, projects like Efforce gain greater relevance among people.

“EFFORCE is the first platform that allows contributors to benefit from the energy savings generated by energy efficiency projects worldwide.”


Users of the platform benefit from efficiency projects by getting tokenized future savings. Improvements made to energy efficiency are meant to be written in real time on the platform.

A Decade of Investments in the Energy Markets

In only a decade, the energy efficiency market reached $241 billion in value with a 10% growth rate per annum. While these statistics are encouraging, there is much work to be done in order to improve the environment.

Global investment will need to grow by a further $584 billion between now and 2025, significantly improving the global goals for preservation of our environments.

Through Efforce, energy savings of third parties are tokenized and can be used by anyone.A limited supply of 1 billion in native tokens are proved by the project.

Wozniak said, “Energy consumption and CO2 emissions worldwide have grown exponentially, leading to climate change and extreme consequences to our environment. We can improve our energy footprint and lower our energy consumption without changing our habits. We can save the environment simply by making more energy improvements.”

Wozniak also has interests in Equi Global, an organization that is looking to push the bar higher for the investment markets with its unique approach to investing with blockchain solutions.

Bitcoin has gained ground in 2020, despite Covid-19 and the perilous market conditions which many traditional assets were not able to handle.

Bitcoin Beats the Odds in a Covid-19 World

Financial journalists who once laughed at Bitcoin are changing their tune as the cryptocurrency continues to rewrite the history books of economies around the world.

Many believe that the demise of cash is inevitable and that Covid-19 has simply accelerated the process. Economists like Ken Rogoff welcomes the demise of cash as it could make the management of monetary policy easier and organised crime harder to commit.

Technology Drives the Demise of Cash

A combination of different driving forces in the technological realms are shaping a monetary revolution that even the most experienced economists may not be able to comprehend to its full extent. The different performances of the U.S. dollar, gold, and Bitcoin sheds light on the new trends that are taking place.

The dollar is the world’s favorite money. Central banks around the world operate based on the movement of its value as it dictates the tempo of international transactions. Over the years, its value has decreased along with the confidence of the masses in it due to disproportionate amounts of quantitative easing and bad debt led by central banks.

According to Bitcoin expert Anthony Pompliano,

“Governments have held a monopoly on monetary policy for decades. They used it to manipulate economies, while driving insane levels of wealth inequality. Bitcoin is the only option built for the people. They can use it to protest central banks, while protecting their wealth.”

With inflation being the thorn in the side of fiat, including the dollar, it is no surprise that more people look to Bitcoin as a store of value, not just as a medium of transfer. Bitcoin has a monetary policy that is anti-inflationary. With its limited supply, it is impossible to devalue it through bad debt like many banks have done with fiat.