Bitcoin in Nigeria is Booming – Here’s Why 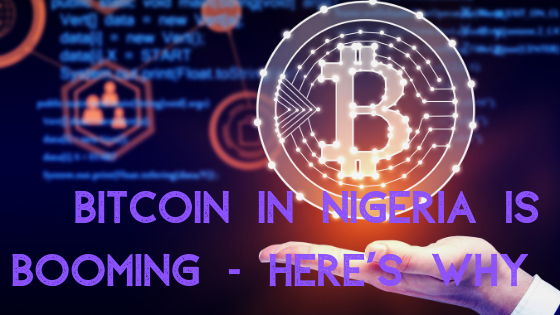 Bitcoin in Nigeria is booming. As of August 2019, more people are looking at how to buy Bitcoin in Nigeria than ever previously. There is just one question. Is buying Bitcoin a legitimately good idea? Moreover, if so, why?

Why is Bitcoin in Nigeria Booming?

If you are planning to buy Bitcoin in Nigeria, it is important to remember, that doing so can be risky. However, Nigerians who have disposable income are increasingly buying Bitcoin for one simple reason. To date, Bitcoin has performed far better over the past ten years than any traditional investment.

Because of the past performance of Bitcoin, many Nigerians believe there is a good chance Bitcoin will continue to increase in value. However, there are several other reasons why increasing numbers of Nigerians are trading Naira for Bitcoin.

Why Being Deflationary Matters

Why Bitcoin being deflationary is of benefit to Nigerians is simple. In 2013, Nigerian entrepreneur Silas Okwoche co-founded a cell phone business in Lagos called Nerve Mobile. Initially, Silas made a profit by importing used cell phones from China. However, over time, inflation in Nigeria saw the value of the Naira decrease against the value of the Yuan by 15%.

The Naira falling against the Yuan made it impossible for Silas Okwoche to continue importing goods from China for a profit. However, where Nerve Mobile failed, other Nigerian businesses have thrived. Specifically, by selling Naira for Bitcoin and using Bitcoin in place of the Naira when trading internationally.

Buying Bitcoin is a Hedge Against a Possible Global Recession

People buy Bitcoin in Nigeria because to date, doing so has helped preserve the value of savings, pensions, and the viability of several startup businesses. At the same time, people globally are starting to see Bitcoin as a safer way to store wealth.

Global financial markets are also becoming increasingly unstable. Largely this is due to the continuing U.S. China trade war. However, Brexit and falling currency prices in Asia and Australia, are also a threat to the global economy.

Is Now a Good Time to Buy Bitcoin in Nigeria?

Local inflation and signs of a global recession mean that smart Nigerians should be looking for ways to protect their wealth. Bitcoin is arguably a good way to do this. However, it is important to remember that Bitcoin prices can be volatile.

If investing in Bitcoin in Nigeria, investors should plan how long to invest for. This is because the easiest way to lose money is to panic sell Bitcoin for Naira at the first sign of pullbacks in Bitcoin prices. Nigerians should also never invest more than they can realistically afford to lose in the long or short-term.