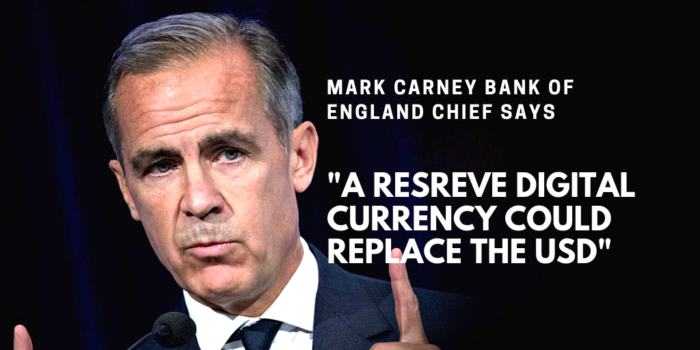 Bank of England (BoE) Governor – Mark Carney at a recent meeting with central bankers worldwide, stated that a cryptocurrency backed by several nations could replace the U.S. dollar as the world’s reserve currency.

Mark Carney believes that a global digital currency similar to Facebook’s Libra will reduce the US dollar dominance as the global hedge currency; a move which will end the cases of USD fiat hoarding by governments and enhance global trade.

The BoE Governor spoke in reference to the current struggle for dominance and control of the international currency market by the USD and other fiat currencies such as China’s renminbi, which seek to replace the USD’s reserve status.

He notes that while the U.S. dollar has played a major role in the world over the past century, recent developments such as increased trade tensions have made many governments resort to hoarding the US dollar to keep up with the swings of the U.S. economy and policies on the market.

This hoarding has in turn led to negative effects on national economies, hence the need for a new international monetary and financial system (IMFS).

Carney proposes a global blockchain-based digital currency supported by a coalition of central banks, as a solution to reduce the over-controlling effect of the USD on global trade markets.

It is an open question whether such a new Synthetic Hegemonic Currency (SHC) would be best provided by the public sector, perhaps through a network of central bank digital currencies. An SHC could dampen the domineering influence of the U.S. dollar on global trade.

…If the share of trade invoiced in a digital currency were to rise, stocks in the US would have less potent spillovers through exchange rates, and trade would become less synchronized across countries.

Carney further referenced the increasing number of electronic payments over cash which has led to innovation in domestic and cross-border payments; with new technologies offering low cost and convenience over fiat.

It will be recalled that the BoE Governor was also consulted on the launch of Facebook’s Libra cryptocurrency, where he expressed optimism while also calling for a perfect product before full launch.

What are your thoughts on the BoE proposal? Share in the comments